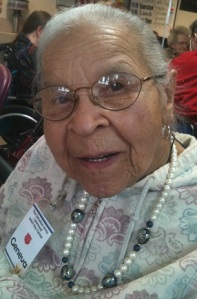 Not if. I don’t want there to be an if. I want to die young. You don’t have to bury me in satin or lay me down in a bed of roses. I know what it’s like to be old and I don’t want it. Though I do think that sinking me in the river at dawn would be pretty cool especially if there’s archers with fire. My Viking dreams aside, I’m good with being cremated in a cardboard box and having a party where those who I leave behind can eat and do what ever the heck else they want in my honor.

I know a little bit about being old because my arthritis robs my body of being ignorant of it almost every day. That old is just physical and means a lot, but nothing at the same time. Of the two grandparents I’ve had in my life both have gotten old. My grandpa died in 1988 of an Alzheimer’s that burned through his brain leaving his body untouched. This man wandered off to be found later that day having walked thirty miles. The sweetest memory I have of my brother is when he coaxed me out of my hiding place after Grandpa hit me in a confused rage. In the end he was a mute that didn’t notice when two little girls snickered over the outline of what was under his hospital gown.

Grandma is different. She has dementia. We’re pretty sure it comes from when she had her strokes. It rolls over her in waves of varying length and intensity. Like a teenager trying to find herself she’s gone through phases and personality shifts that effect those closest to her the most. Her body has not fared well. It’s disintegration causes her even more confusion. She doesn’t know what to do with her own body anymore. It doesn’t work like it used to and she is incapable of learning the new quirks she must use. Unlike Grandpa she knows who we all are and can fake a level of health for the people who see her infrequently. The memories of her past are as spotty and subject to exaggeration as those in the present. The slow erasure of the woman she used to be effects my memory of her as well. From the days before she was sick, I only remember flashes of her in the kitchen cooking. When she dies I will remember her as she descended into old age. I will only clearly remember the times when my mom, and sometimes I, took care of her. I don’t remember when it was the other way around. I don’t remember when I came home from school and she was there waiting with a meal. I don’t remember her taking me on adventures while my mom was at work. I don’t remember her letting me sneak out to the movies in the summers starting at twelve years old. I know all those things happened but the woman who stares, and smiles, and waits, does not seem like the same woman.

Soon Grandma will go into surgery to get her pacemaker replaced. A quick 15 minute procedure, but at 97 they give her a 20% chance of surviving the anesthesia. If it was up to me I don’t think I would give permission for the surgery. I would let the battery die. I would let her die. Being a caregiver to someone who is being stripped of humanity from the inside out is hard for me. Death doesn’t scare me as much as never being able to learn another thing in my life.

A couple of years ago, there was a medicine that worked for my arthritis. I danced, I worked out, I walked. What I couldn’t do was read, or write. I also couldn’t drive. I could feel my IQ take a dive and my freedom was linked to who could drive me that day. I chose to let my joints stiffen and the pain to return because I learned that without my brain fully functioning I could not be me.

I don’t know what Grandma would choose if she was still the person in the not so solid memory of my  youth. But I have made my choice. So let me die young, I have already seen old.

[The song If I Die Young by The Band Perry]